Posted at 21:49h in Uncategorized by Ralph
0 Likes

Bat fatalities at wind turbines have been reported at many sites and sometimes in alarming
numbers. Reducing bat fatalities is important both for species protection and for
positive public perception of wind turbines. Currently the only way to substantially and
reliably reduce fatality numbers is to run turbines with curtailment algorithms that stop
the rotor during times of high collision risk (operational mitigation). 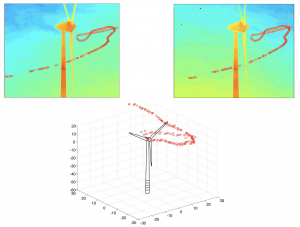 Curtailment algorithms that reduce the number of bat fatalities are usually defined based
on the wind speed measured at the nacelle of the turbine. Sometimes the time of year,
time of night, temperature, and precipitation are also considered. hese variables have a
great inluence on bat activity, and can therefore be used to predict collision risk. In an
earlier study, RENEBAT I, we developed a method to quantify and reduce the collision
risk for bats at wind turbines using curtailment algorithms tailored to the speciic turbine
or wind facility. he algorithms are based on the acoustic recording of bat activity in the
rotor-swept area, as well as the wind-speed data recorded at the wind turbines in question.
A “bat-friendly” curtailment algorithm then determines the times of low energy-yield
and high predicted number of bat fatalities. During these periods the blades of the wind
turbine rotor are feathered (adjusted parallel to the wind) with the rotor moving at a low
speed (free-wheeling). his kind of turbine operation can reduce the risk of bat collisions
to an annual average set by the relevant public authorities, while at the same time keeping
the resulting loss in energy-yield at a minimum. Careful site-selection is however important,
because at sites with low bat activity the idling times will be correspondingly short. 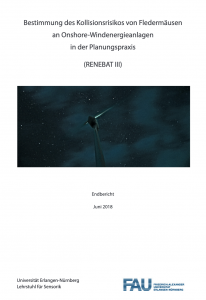 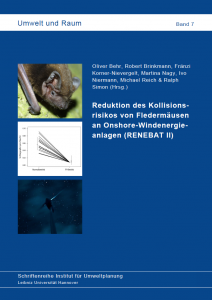